Ignite the reels with fiery rewards across 25-paylines and win Electric Prizes up to 250x your bet!

Can you handle the heat of Sweet Chilli: Electric Cash? Play this new Ainsworth game and earn one of four jackpot prizes. 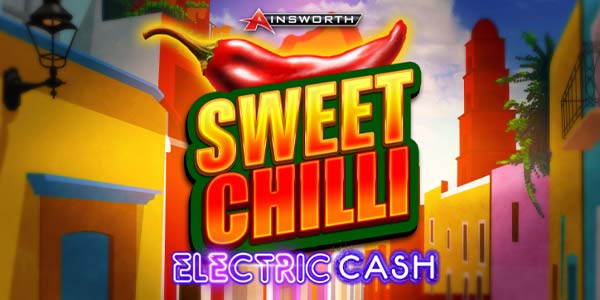 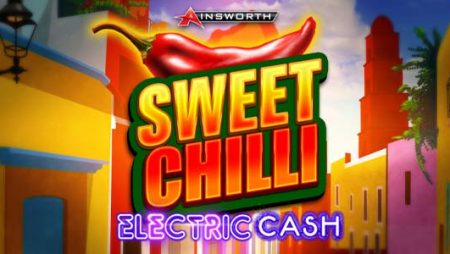 Head south of the border to a vibrant Mexican town for the grandest of fiestas in Sweet Chilli: Electric Cash online slot machine by Ainsworth Gaming. Featuring a 5-reel 25-line layout, you can crack into spicy slot bonus features like free games with sticky symbols, jackpot rewards, and special Electric Prizes. Hitting an Electric Prize can reward you with some serious coinage up to 250x your total bet!

Mexican Magic On All Devices

Officially released by Ainsworth on November 22, 2019, Sweet Chilli: Electric Cash is one of the newest games from the Aussie development giants. Being A new game, the company has ensured that it can be played on your desktop computer, tablet, or mobile device for the iOS and Android platforms, making it truly universal. Play the game wherever you are and whenever you want.

As with some of Ainsworth’s other slots, this new release boasts bright and fiery graphics with characteristic Ainsworth sounds. The lowest-value symbol pays back 0.2x, 0.4x, or 2x your stake when landing on three, four, or five reels on a line. A bottle of hot sauce and the flaming chilli each return between 0.8x and 8x your stake, depending on how much of a payline they fill.

Wild Symbols appear on the reels as Mexican wrestling masks and can complete winning combinations on the reels. The only symbol wilds won’t replace are scatters. Wilds appear on reels 2, 3, 4 and 5.

Red and Green Peppers can appear on reels 2, 3 and 4 during paid games and the free games feature. They’ll always appear on screen with a random Electric Prize of 1, 2, 3, 5, 10, 25, 50, 100 or 250 times your total bet OR a Mini or Minor Bonus Jackpot. If you land 6 or more pepper symbols you win all Electric Prizes appearing on them. Electric Prizes are awarded at the end of the Stick & Spin Feature.

Land three or more Sweet Chilli game symbols to win 10 free games. Free Games are re-triggerable so you can keep winning round after round. The Free Games round is played with a different rewarding paytable.

Sweet Chilli: Electric Cash is a terrific new release from Ainsworth that electrifies your gameplay with vibrant graphics and intricate gameplay. The Stick & Spin Feature is the main grab of the game and where you can really load up on hefty payloads. With a seeming medium volatility, the game can run cold for brief periods but when it heats up, these hot chillies can award some really fiery prizes!