Play Slots O' Gold Megaways offering up to 15,625 ways to win, and have the chance at triggering the Jackpot King Deluxe Progressive Jackpot prize! 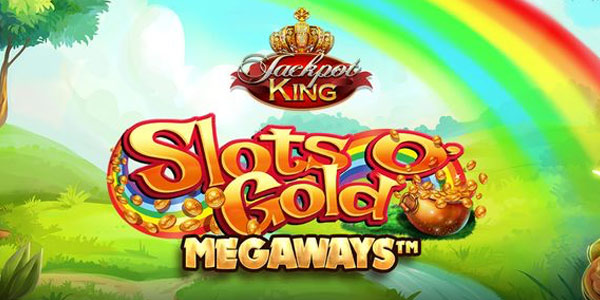 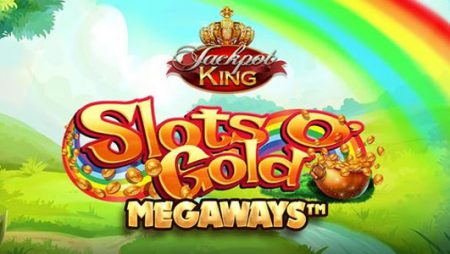 Get ready for St. Patrick’s Day slots riches with the exciting Slots O’ Gold Megaways game from Blueprint Gaming! The Irish themed game offers you up to 15,625 Megaways to win across 6 reels that boasts up to 5 symbols high. Follow the rainbow in search of your pot of gold, and try to trigger the progressive jackpot through the Jackpot King Deluxe feature.

You are sure to be tapping along to the jaunty Irish music as you enjoy the charms of Slots O’ Gold Megaways casino game. This is a high-spirited slot that gathers together some of the main icons of Irish culture in a fun package oozing charm! The game features the highly prized Megaways math mechanic under license from Big Time Gaming, giving you up to a staggering 15,625 ways to win.

There are 15,625 ways to win on this megaways slot, which keeps life interesting on every spin. Don’t forget that the Jackpot King prize is also there to be claimed, with three different pots for you to try and get your hands on. You need to land five Jackpot King special symbols and then start collecting crowns to unlock the Wheel King.

The brilliant rainbow respin feature is kicked off when the friendly leprechaun appears on the second, third, fourth or fifth reels. He expands to give you a wild reel and stays in place while the rest of the symbols are given another spin.

Each reel can reveal up to 5 symbols in view. Each spin can have up to 15,625 ways to win.A win is matching consecutive symbols, regardless of height, all prizes pay left to right and right to left. All winning combinations are added together.Payouts are multiplied by stake. Megaways™ under licence from Big Time Gaming.

The Wild Leprechaun symbol can be used to help form line wins by substituting for other symbols (on reels 2, 3, 4 and 5 only). The Wild symbol cannot substitute for scatter symbols or bonus symbols. Only the highest paying win on each line is paid (for example 3 wild symbols being a win or those symbols being used with another symbol to make a win of 4 symbols will only pay which of those two is the highest).

The Megaways mechanic from Big Time Gaming has proven to be one of the most exciting mathematical releases for slots in recent years, making Slots O’ Gold Megaways a thrilling release. Players get up to 15,625 ways to win across 6-reels with the chance at winning a random progressive jackpot for even bigger wins. This St. Patrick’s Day, take a trip to the Irish countryside and cozy up with cheeky leprechaun for big wins!